This solitary park offers a secluded getaway for those who want to leave the beaten path. Like several of the forts at the entrance to Puget Sound, Ebey has old gun batteries and underground passages to explore. Bring a flashlight for best views. Also, it’s a popular Puget Sound surfing spot! 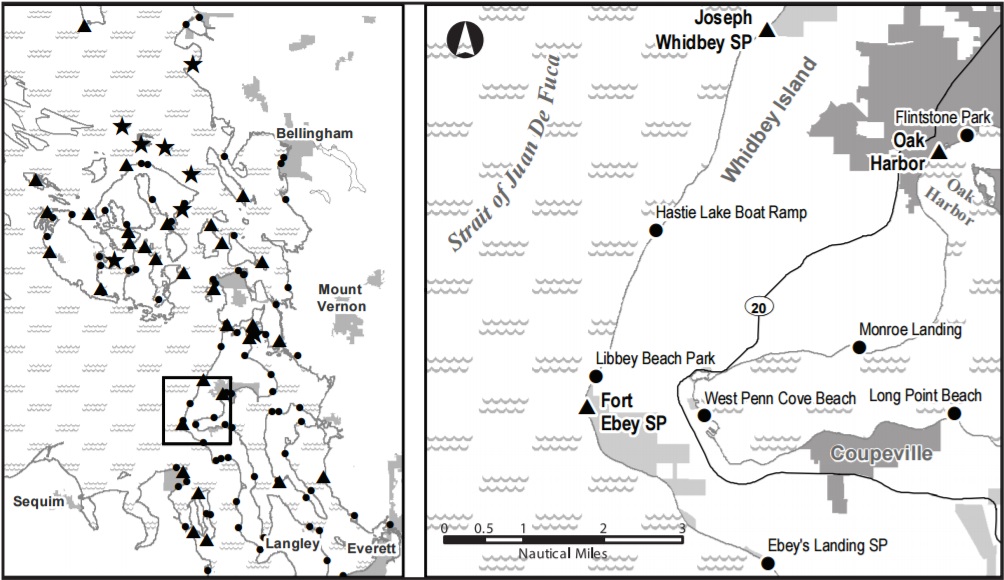 Location: Fort Ebey is on the western shore of Whidbey Island on Point Partridge, west of Coupeville. The site is located at the south edge of the day-use area, just north of the navigation light (flashing white 5 seconds).

Hazards: Winds from Strait of Juan de Fuca; dynamic tides and currents along entire west coast of Whidbey Island can be dangerous, use caution. Light and foghorn are active.

Water: Available in the day-use area

Overflow: In main campground or at the walk-in sites at Pondilla Lake

Fires: No fires at site, upright barbecues at day area

Special Considerations: Fragile ecosystem; the kayak haul-out area is on beach grass. Please minimize disturbance of grass and use designated trail. Large accumulations of drift logs may make difficult passage from beach to campsite. Use care, as drift logs may shift and roll.

Natural History: Another of the triad of defender forts of Puget Sound. Fort Ebey, constructed in 1942, was named after the pioneer commander of the 1855 militia stationed on an island in Ebey Slough. The park stands on the site of a World War II gun battery which had two six-inch guns in place during the war. The guns were later removed and scrapped.