Nestled between Orcas and Shaw Islands, this 3-acre island receives heavy use by boaters seeking a glimpse at the various and abundant species of wildlife. The island is at the mouth of Blind Bay. At night the lighted ferries serve as moving candelabra.

The pictures below were taken at our annual work party, one of our most popular events. Noxious weeds such as ivy and Himalayan Blackberry need to be kept at bay. 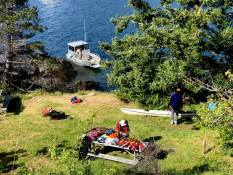 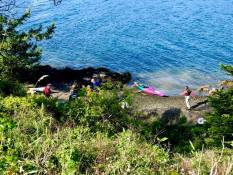 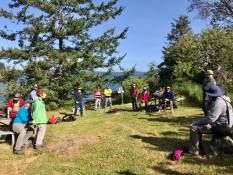 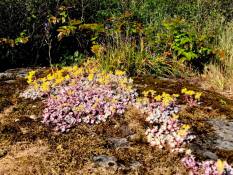 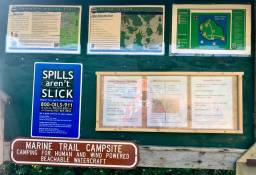 [Show as slideshow]
Approach: Gravel. Approach from the west or southwest.
Location: Blind Island is in Blind Bay, just west of Shaw Island ferry dock.
Hazards:
Sites: 4
Water: None
Sanitation: Composting toilet
Overflow: None
Fires: 4 fire pits
Extras: 4 picnic tables
Fees: $12/night for up to 8 in site
Special Considerations: Be careful not to disturb nesting birds. Notice cherry, apple and filbert trees from old homestead. Very exposed to wind.
Natural History: In the early 20th century, a squatter set up housekeeping, building a small house and storage sheds. He lived like a hermit, existing off his work as a fisherman and his small garden, evidence of which remains today. This man dug several holes into the rock, evidently to be used as cisterns, and built a concrete retainer around a natural spring on the island. The retainer is the only structure which remains on the island, as all buildings were removed in 1972. Today, the island is visited by golden eagles, bald eagles, great blue herons, belted kingfishers, owls, hawks, scoters, rhinocerous auklets, oystercatchers, and glaucous winged gulls.
Max People:
Max Nights:
Reservations: No
Latitude: 48.5849
Longitude: -122.9377
Print

We are grateful to the Port of Brownsville for our Cascadia Marine Trail site! We just left off new signage and wonder if there are any volunteers available to help 🙂The sign could use a bit of glass cleaning as well  💦💕💦 ... See MoreSee Less

If you drive to San Juan Island County Park in ord

Posey Island State Park, one of our favorite Casca

Washington Water Trails May Newsletter/Thank You!/

Final Moment for GiveBig; We Appreciate Your Donat

Today is the (Give) Big Day for Washington Water T

WWTA and Robert Nissenbaum Present "What's in my P

Our Kayak Point campsite on the Cascadia Marine Tr

We are taking a little trip to Oak Harbor, on Whid

WWTA - Best Wishes for the New Year! Image thanks

For the Love of Water Trails! Copy and paste this

Last Day to Join or Renew Your WWTA Membership and

When you catch the early ferry… #wwta #washingto

BBQ and get-together in Steilacoom at Sunnyside Be