An early 20th century resort converted to a county park that now has 21st century yurts to stay in. You’re apt to see lots of people fishing and crabbing off the pier, or simply enjoying the 3,300 feet of public shoreline. The County Parks Department purchased and developed the site with Snohomish County’s first park bond issue. 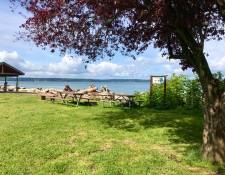 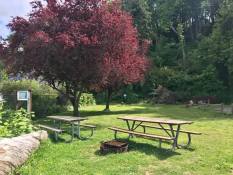 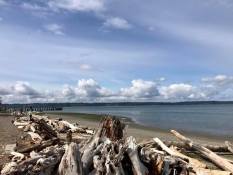 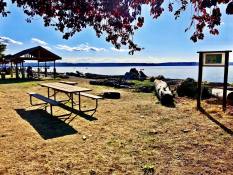 [Show as slideshow]
Approach: Sand and marble size rock on beach. At low tide it's good landing; at high tide, try the boat launch near the pier about 100 yards south.
Location: This county park is on the east side of Port Susan across from Camano Island. The site is at the northern boundary of the park, just after the parking and picnic tables.
Hazards: Can get very windy
Sites: 2
Water: From March-Oct, closest water is near shelter #10, 25 yards west of the site. Nov-Feb, water is available in restrooms at the center of the park.
Sanitation: From March-Oct., closest restroom is near shelter #10, 25 yards west of the site. The rest of the year it is available in the restroom in the center of the park.
Overflow: None
Fires: Use fire ring at site. Please do not burn driftwood. Wood is available for purchase in the main office.
Extras: Picnic table
Fees: $10.00 per boat per night. Details at: https://snohomishcountywa.gov/960/Fees-Prices
Special Considerations: Camping by reservation only. Reseve site 72 hours in advance by calling Kayak Point County Park, 360.652.7992. Camping limited to one night. A ranger will collect the fee. More info at: https://snohomishcountywa.gov/Facilities/Facility/Details/Kayak-Point-Regional-County-Park-51
Natural History: In the early 1900s the Kilian family developed a resort at Kayak Point. Two of the sons from this family kept Inuit kayaks, from one of their Arctic expedition trips, at the beach. Later, the kayaks were mounted on display: this generated so much attention that the resort became known as Kayak Point.
Max People: 5 (one party per night)
Max Nights: 1
Reservations: Yes. Call (360) 652-7992
Latitude: 48.1352
Longitude: -122.3680
Print