This site may be the plushest Cascadia Marine Trail site, with access to showers, laundry and a deli just steps away at the Port facility. You can barbecue your selection at the deli or have a salad. The campsites are in a charming park which is frequently the setting for wedding ceremonies. 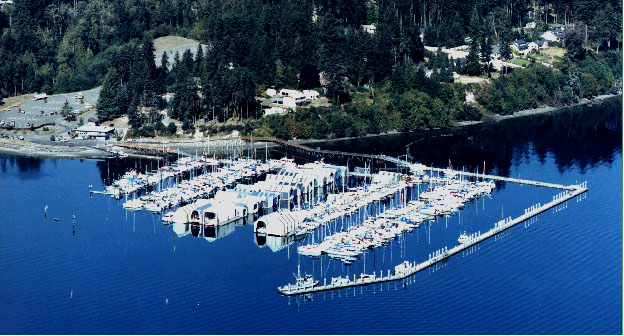 Approach: Cobble; landing beaches can be approached from either the north or south. From the north, boaters must glide under the walkway to the breakwater to get to the beach.
Location: In Burke Bay on the Port Orchard Waterway, west of Bainbridge Island, between Bremerton and Poulsbo. Campsites are located in the northern part of the Port's Overlook Park.
Hazards: None
Sites: 5
Water: Spigot in camping area
Sanitation: Bathrooms at the port facility
Overflow: In campground next to Cascadia Marine Trail site.
Fires: Fire grate available
Extras: Laundry, café, grocery, and showers at Port Facility
Fees: $4 per person per night; pay at port office.
Special Considerations: The beach may disappear at high tide, so be prepared to carry your kayak up to the grassy area above the beach. Locks and chains are available from the Port office to lock your boat to the fence, and are included in the camping fee.
Natural History: Soloman Brown was one of the first non-Native settlers in the area that now bears this name. He began his homestead in 1863 and by 1890 the area had a schoolhouse, store and post office. None survive today. The first Brownsville dock was built in 1901 by the local citizenry. On June 1, 1920, the Brownsville Port District was formed . Most of the buildings surrounding the Port today were built in the 1970's, including the north breakwater. The east breakwater was constructed in 1999.
Max People:
Max Nights: 2
Reservations: No
Latitude: 47.651666
Longitude: -122.615
Print

One thought on “Port of Brownsville”