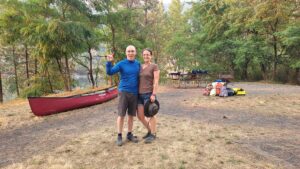 Many thanks to Sándor Lau and his wife Julie for contacting us about paddling the Northwest Discovery Trail. Here is their trip report!

The shuttle was absolutely most difficult part of it. We were able to pay a friend to do us a big favor and shuttle us from Little Goose Dam to Pink House camp site in Orofino, ID where we put in. If we had to do it again,
would call around tow companies or taxi companies in Lewiston/Clarkston.
Ranger at Little Goose dam was very generous allowing us to park the car there I think 8 days under the video camera at top of dam. Even came to check on us when we arrived. 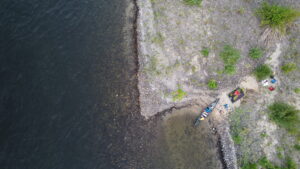 Two days on Clearwater River from Pink House/Canoe Camp were bliss on moderate class 2.
Camp at Pink House, Orofino, ID
Ramp up from river to McKay’s Bend Campground was very steep for a canoe with perhaps 200 lbs of gear, and about 1/4 mile, so we kept paddling and found a quiet beach on an island a little down stream.
I would consider the Clearwater segment by far the most exciting paddling of the trip. clear water. we should have brought fishing poles and got ID licenses, passed many large rainbows easily visible. Big current, I think we averaged 6-8 miles/hr without paddling that hard. 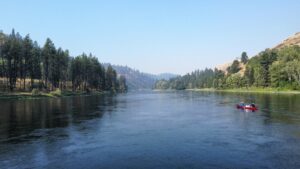 We did start to see a few more paddlers, even paddleboarders on day two from island downstream of McKay Campground to Lewiston.
It was crucial to stock up on provisions, especially dry ice in Lewiston. We stayed in the tiny house at Hell’s Canyon Marina in Clarkston. Walked approx. 1mi to Safeway for dry ice. 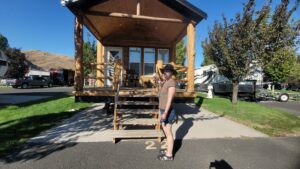 Put in our lines as soon as we crossed into WA where we have licenses and the bass were hungry for rapala baby bluegill lures.
On the Snake downstream from Clarkston, there was virtually no current for us on the reservoirs, so hard paddling and 100 degrees.
We are big fans of Confluence and had to stop at the Listening Circle at Chief Timothy Park that was beautiful, but very overgrown with tumbleweeds and unmaintained. 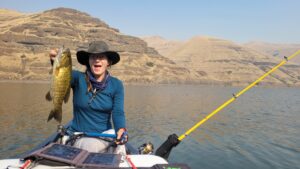 The free campgrounds from Army Corps of Engineers are abundant, but there is limited shade and we did not feel comfortable staying there when we had other options. We rarely met people at them, but there were a lot of vehicles and trash indicating people in difficult circumstances, so we scouted maps closely and stayed on islands and sandbars.
This island shows up as Kelly Bar on the map and was quite a treat we had to ourselves.

Granite Dam portage was our first portage of this size and was quite a workout. Portage route may have changed since last published details and is on south bank of river. Think at least a mile. It was a little sketchy on a narrow road with the canoe but limited traffic and low speed limit so we were fine. The launch on the downhill side of the dam is covered with drift logs so we had to hand carry a while to get canoe to water. 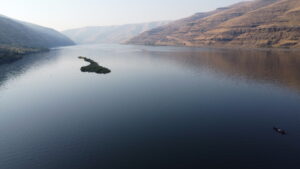 Boyer Campground and Marina was a lifesaver for ice and a little internet. We had Tmobile at the time and barely had coverage but my wife’s work phone was on Verizon and we did get occasional signal.
Illia Landing was our only Army Corps Campground we stayed. Neighbors were playing Outlaw Country Radio to their hearts’ content on speakers. We tried to launch at first light most days and needed good sleep. Asked nicely for them to turn it off at dark and surprised they obliged. Could have easily gone another way though, and sand bars worked out way better for us.
Wawawai County Park was only $8 and was a delight. good path to wheel the canoe up to camp. Only place on the trip we felt we could safely leave the canoe and our gear and go on a hike. Nice shaded camping with grass 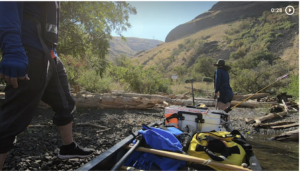 kept it much cooler for us and other campers very well behaved.
Central Ferry Park was unmaintained and overgrown. we met some staff there who said o yes, camping allowed but our only options were clearing massive amounts of tumbleweed or camping on pavement. Water there was also a little gross and it just felt a little creepy, unmaintained place so we continued on and were delighted to camp downstream at New York Island where driftwood architecture and sunset views awaited. This was the best camp of the whole trip. 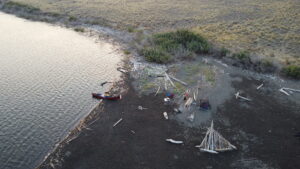 Car was safe at Little Goose dam when we arrived.
We did the Columbia from Beacon Rock to Astoria two years ago, so we’re definitely eager to complete the whole trail and make it from Little Goose down to Beacon Rock.
Thank you so much to WWTA for the intel. There were only very occasional other paddlers, we saw the occasional barge or cruise ship but apart from that and a few fishermen, we had the river to ourselves. Could not possibly have done it without WWTA guidance.
Sándor Lau, YouTuber, filmmaker, writer
SandorLau.com
SandorsOregonTrail.com