A pleasant glide on a flood tide takes you in the long throat of Stuart Island to the western most campground on the Cascadia Marine Trail. Time your arrival and departure to the tides to avoid a long haul to the campsite.

Allow time for game spotting as you pass Spieden Island, once an African game farm. Landing on Spieden is prohibited. The currents can be rapid along the island, and rough at the northeastern tip.

Roche Harbor has let us put a launch-and-land site from the south side of the resort. Overnight parking fees apply.

Hike up the stairs from the campsite for a nice view of the harbor or head out to the lighthouse. 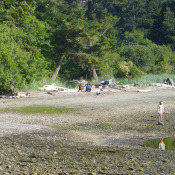 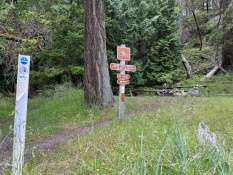 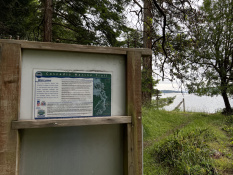 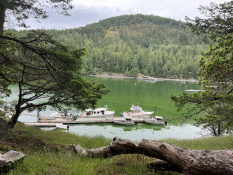 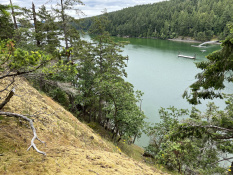 [Show as slideshow]
Approach: The lengthy sandy beach and towering trees are welcome after a long paddle through Reid Harbor past larger boats that won't be able to get where you're heading. The campsite is at the north end of the harbor so make landfall to the starboard.
Location: Stuart Island is 4 miles northwest of San Juan Island. Campsite lies 1.5 miles northwest from the opening of Reid Harbor. Reid Harbor has a marsh at its head close to the campsite.
Hazards:
Sites: Three sites on the right hand side of Reid harbor are water trails sites . There is also an overflow site on that right hand side.
Water: Available May 15-Sept. 4
Sanitation: Composting toilets.
Overflow: Saddle area between Reid & Prevost Harbors
Fires: Fire rings available
Extras: Excellent clamming for littlenecks and butter clams on the gravel beach.
Fees: $12/night for up to 8 in site
Special Considerations: Remember to respect adjoining private property boundaries. The Turn Point Lighthouse, Stuart Island School, and Stuart Island Historical Museum are open variable hours during the Summer months.
Natural History: Stuart Island was named either by the Wilkes Expedition in 1841 in honor of Frederick D. Stuart, the captain's clerk on the expedition, or for Captain. Charles Edward Stuart of the Hudson's Bay Company in Victoria: the jury is still out. A family of settlers known as the Chebaliers lived on the island for several years, sustaining themselves by raising turkeys, logging, and cultivating a large garden. The oldest son, William, rowed two miles each day to the school at the head of Stuart Island's Reid Harbor.
Max People:
Max Nights:
Reservations: No
Latitude: 48.676266
Longitude: -123.204533
Print